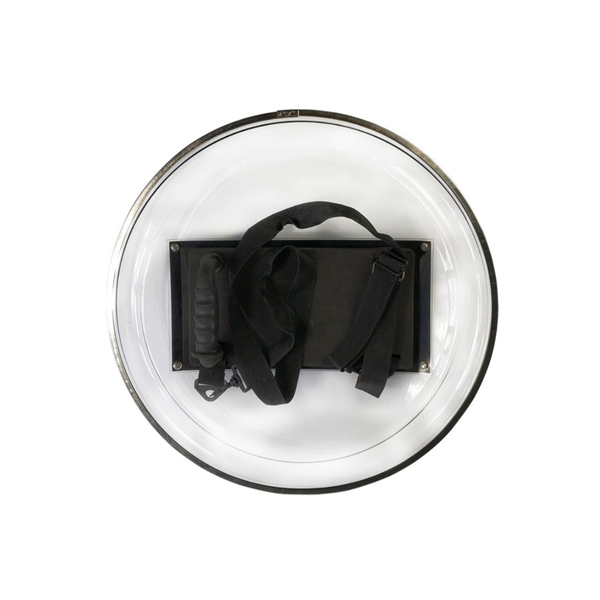 PC transparent circular riot shield w/ metal edging was composed of Shield plate and back plate. The shield has a smooth surface and metal edging, which can effectively hinder the attack of dangerous objects. The double-layer board surface design, the back panel is designed according to the human body structure, and the double grips, the operation is simple and convenient, safe and effective.

Riot shield basic style:
The first one is our more common basic anti-riot shield. The material is imported PC material. The thickness of the shield PC board is 3.5mm and the light transmittance is ≥89%. It is one of the most ideal anti-riot shield materials.

The advantages of polymer imported PC materials:
I can achieve the perfect combination of high strength and reasonable toughness;
II Good impact strength and puncture resistance;
III has good cushioning and anti-vibration performance;
IV has good light transmittance;
The basic anti-riot shield weighs less than 2.5kg, and has a protection area of ≥0.45㎡. The back is composed of a handle and an armband, which is comfortable and powerful to hold and facilitates protection in various forms.

The second reinforced circular anti-riot shield, the circular design makes the attack and defense lighter, and the weight is only 2.29kg, which effectively reduces the burden of the holder and is easy to carry. With a shield in one hand and a stick in the other, the police can be both offensive and defensive.

Where is the strengthening?
This shield is made of double-layer PC board with metal edging around it, which can effectively prevent knife cuts, stick strikes, and block corrosive liquids.

The third French riot shield, the arc-shaped shield surface can effectively buffer the impact of objects, and the convex and concave shape design can cover the head from damage, not only to protect yourself, to protect teammates, but also to protect your teammates when necessary. Front top shield hit.

The fourth wall-type riot shield consists of two large and small protective panels. The wall-type riot shield can be used in multiple combinations. The semi-circular grooves formed at both ends of the shield body are used to connect with each other to form a row of shield walls to resist attacks by foreign knives, sticks, sticks, stones, etc., and effectively cover the advance of people behind them. Evacuate and block the opponent's advance, etc.

The fifth reinforced combined anti-riot shield comprehensively improves the performance and design on the basis of anti-riot. The double-layer board design of the shield plate and the back plate realizes flame retardancy and strengthens the protection performance.