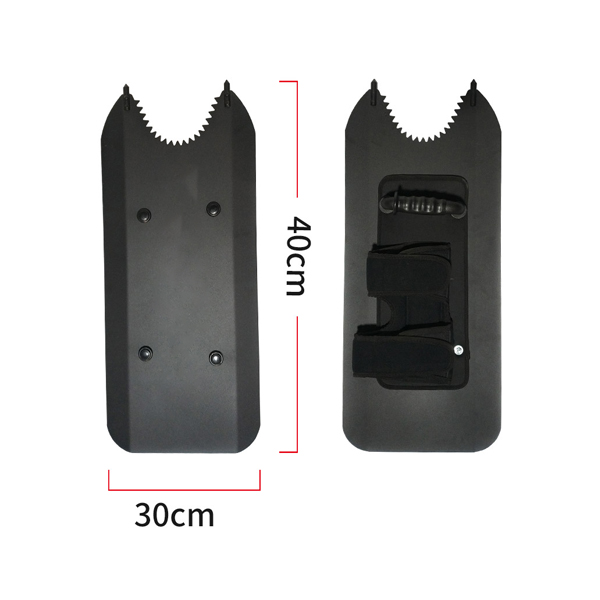 Upgraded arm shield with lighting function features lightweight design, high-density foam cushion, high-strength aluminum alloy handle (outsourcing rubber to enhance the friction of the handle), smart arm plate with adjustable arm nylon strap.It was made of aluminum alloy material. with strong and light with dazzling function, it can effectively interfere with the opponent when defending. This arm shield does not affect the various police equipment and equipment held in both hands, and at the same time improves the police’s defensive ability and the ability to attack and counterattack.

. Item No. : Upgraded arm shield with lighting function
. Size: 690*300mm
. Thickness: 2.3mm
. Weight: 2.1kg
. Material: aluminium alloy
. Impact resistance: meets the standard 147J kinetic energy impact
. Grip connection strength: ≥500N
. Armband connection strength: ≥500N
. Broken window head is made of the alloy, which is strong and durable, the round head design is not sharp, and the window breaking effect is good.
. Embedded strong light design, dazzling light to delay the action of the other side.
. The back is equipped with a fixed arm belt, easy to use, thick buffer layer, shockproof buffer.
. The impact-resistant EVA sponge has good elasticity, strong impact resistance, and can effectively absorb external forces.
. Rechargeable design, the charging jack is at the back panel battery case.
. The zigzag shape design at the top can block the opponent's equipment and increase the safety time.
. Customizable logo on the front.

According to the survey, when people are suddenly attacked, the first reaction is to use their arms to defend. Once the arm defense system is destroyed, the entire protection system is greatly reduced.

The arm shield is designed to reflect this. It is small in size, light in weight, comfortable to wear and integrated with offense and defense, which can greatly improve the defense and counterattack of front-line law enforcement officers. Not only that, the current arm shield has various functions, integrating attack, defense, riot suppression, restraint, dazzling, lighting and other functions.

The front-end position of the arm shield is thoughtfully designed with a glare device, which adopts a high-brightness LED light source with a central illumination of 120 lumens, which can continuously illuminate for 30 minutes, solving the problems of limited vision and difficult law enforcement in a dim environment. It also has a strobe mode, in an emergency, aiming at the opponent's eyes to achieve the effect of instant blindness.

It also has the following characteristics:
1. Anti-attack, strong protection
Made of high-hardness, high-toughness 6061 alloy aluminum, only 2mm thick and 2.1kg, the texture is light and thin. Strong protection, anti-knife, anti-hitting, one-handed, more flexible and changeable use. When attacked by hard objects such as sticks, the shield can effectively resist and evenly distribute the strike energy to protect the user's safety. At the same time, the inner side has its own EVA cushion, which can greatly reduce the impact of the blow on the arm, and the protection ability is stronger!

Second, in addition to self-defense, it can also do active countermeasures.
The front end of the arm shield is equipped with an arc groove, which can be used to control the opponent's arm and the weapon when attacked, and at the same time, the weapon can be thrown out instantly by waving the arm to achieve the effect of control.
In addition, you can also use the elbow strength, with a shield, to resist external attacks, and use the elbow to attack, lock the opponent, and block the opponent's range of action.
For anti-terrorism and emergency situations, the arm shield comes with a window-breaking attack head, which can break 15mm tempered glass in seconds, which is suitable for emergency needs in different occasions.